Do you know while reading this blog, some processes are getting automated using Robotics Process Automation services?

Here, this article will address all these questions. Also, provide you with in-depth insights to use RPA accordingly for your organization.

Early RPA – From Where it All Started

The most frequently asked question is, “Did RPA exist long ago under the umbrella of traditional automation?”

Though the term Robotic Process Automation emerged in the initial years of 2000, it had its primary developments after the 1990s. The early chapter of RPA tells that it had three to four key predecessors which were Screen Scraping software, Desktop Macros, Workflow Automation and Management tools, and lastly, Artificial Intelligence.

RPA still relies on these technologies, but have uplifted the precision in the process and have exceptionally improved their capability to increase the quality of deliverables to the users.

The Evolution of RPA – Unskippable Benchmarks 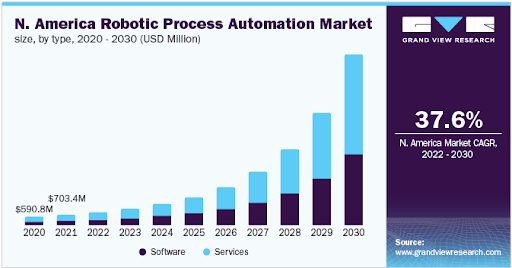 Undeniably, RPA’s growth has witnessed an unprecedented rise in the last few years. And its impacts are higher than you could have thought.

Since RPA implies automation to the workflow using drag and drop features without relying on the code, the proliferation of RPA was exceptionally easy. And the best part is people can easily adopt and use RPA even if they are rookie to robotic process automation.

To simply put, RPA has reached a potential where the software robots have the capability to work round the clock without needing any human intervention.

“Unsurprisingly, IT automation has the fastest adoption to RPA and penetrated globally into the market.”

Considering Finance and Accounting, the notion of “craftsmen” work has reached unparalleled levels of productivity and precision compared to the traditional ways. The only difference that occurs with human work is eliminated and made consistently efficient through RPA.

To put it all, RPA in finance has started swapping the data entry and the data rekeying jobs with its automated software robots and techniques. Also, it’s anticipated that in future no data entry, rekeying and other repetitive monotonous tasks will be done manually. Approximately, all of the protocol and rule-driven tasks can be automated easily through RPA.

What the Expert Predicts for its Future

Having an in-depth understanding of the evolution of RPA shed light on the innovation of the wider industries from which it initiated. And, its exceptional rise clearly shows that the thirst for advancement will continue as technology grows.

As a result, experts predicted numerous effects that this may have on the present technology and its uses.

Nowadays, businesses are aware of the benefits of RPA and what competitive edge are offered by integrating it in their businesses.

In the last few years, the impact of RPA has already become exceptionally significant as it inclined from being used in primarily multinational companies with larger budgets to the realm of national, mid-cap and also smaller businesses. And, as this trend continues, Robotics Process Automation services seem to be adopted by more and more companies to integrate through a wider array of processes.

With RPA becoming more mainstream, more RPA use cases are getting popular. And, as the technology expands into a wider variety of industries including the ones with significant power like banking, financial services and retail, law, oil and gas, insurance sector and manufacturing industries.

With advancements in technology, more organizations are constantly trying RPA and witnessing results from it. As a result, most businesses are being motivated to try their hands with software’s capabilities – in simpler terms, this is making the segment primed for innovations and new applications soon emerging.

Though, with RPA presently focusing on business internal processes, it’s better to consider it that as innovation happens, developments take place in what RPA can do for external processes.

RPA will certainly maintain its core focus on internal processes.

For example, incoming email classification is an area which is already massively improving with the help of RPA. In the coming years, most computer-related processes that are managed with a set of protocols will be handled with the help of RPA as well as analytics and data analysis.

Compatibility with Other Tools

Soon, it will be common to see RPA used in compliance with other workplace tools. As companies increasingly adopt RPA into their processes it becomes clear that it works best when integrated with other tools that they use.

Eventually, this results in RPA being used more in conjunction with other work management platforms.

SPA is Going To Be The New Constant

SPA – Smart Process Automation is coined as the next evolution of RPA.

The RPA deployed in most of companies and organizations today face challenges to automate unstructured data, but SPA will blend Machine Learning, Artificial Intelligence, Big Data and Cloud technology to extract data from unstructured sources and process it contextually with more intelligent rules.

Artificial Intelligence and Robotic Process Automation are intrinsically related through their shared history.

So, it’s no more a surprise that the next phase of RPA is expected to consist of greater incorporation with AI as Robotic Process Automation steps far away from being simply a rule-based technology.

In the coming years, with advancements of RPA getting fully evolved all those operations that a human does will be automated by RPA.

These platforms will be to address the unforeseen errors and exceptions in the business process, will learn and adapt based on their previous experiences and actions. Despite conventional automation, they can also apply judgment and creativity to their work, allowing companies to automate enhanced visibility, collaboration, transparency across the value chain.

Thus, it’s right to say that there will be a widespread adoption of RPA across different fields. And, if you are planning to ride the bandwagon, partnering with a trusted RPA consulting services is the first step to a promising future.

After all, RPA can spark a wider cultural change that has increased flexibility, success and satisfaction.

Send us your requirements. We will get back to you with a free quote.

Want to See Your Idea as the Next Big Thing?

Send Us a Message

Drop us an e-mail at [email protected]